Spyder 5.1.5 Error "Image not detected!" when run in Anaconda Base

After installing Spyder 5.1.5 into the Anaconda base environment using “conda install spyder=5.1.5”, when I try to run it I get the error “Image not detected!” and it actually comes up but the prompt window is hung. If I close the prompt window, Spyder closes as well and I am taken out of the base environment. It seems as if there is a conflict. Is there a way to go back to the earlier spyder version(4.1.4) in the anaconda base environment or do I need to delete spyder 5.1.5 and re-install spyder 4.1.4? Or would anyone know how to fix the conflict so I can keep spyder 5.1.5. I am on a Windows 10 PC with Anaconda 4.12.0(just recently updated).

you can downgrade spyder by using the command conda install spyder=4.1.4
I’m not sure why you are seeing the behavior you are seeing. Some things that would be helpful to know to try and figure it out:
If you launch Spyder from a terminal, are there any error messages there?
Can you share the output from conda info and conda list --show-channel-urls ?

Thanks for the help, Crystal. I did go back to version 4.2.5 just as you suggested and now spyder is working OK. Unfortunately, I am now having a problem with updating anaconda-navigator. Here is my (base) prompt message:

I’d recommend doing a conda install anaconda=custom
I think you are running into trouble because your anaconda metapackage is pinned to v5.3.1.

Thanks for the advice. Do I need to uninstall the current anaconda3 first? What specifically does “=custom” do for the installation? Does it install fewer packages than the normal install?

You do not need to uninstall the current anaconda3. There is a metapackage called “anaconda” that pins the versions of certain packages within it. This metapackage has a special version “custom” which unpins all the packages within it - which once set, allows you to install packages of different versions of your choice, instead of the particular ones pinned with the Anaconda Installer releases.

Hi Crystal, I did the anaconda=custom install successfully and it downloaded the following:

When I run Navigator from the anaconda prompt, anaconda3>anaconda-navigator, I see the following display and the green circle with …loading applications… it just hangs at this point. 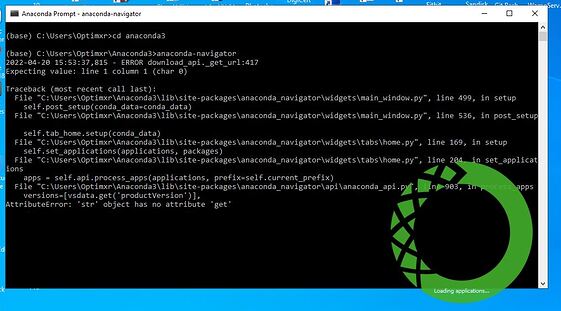 Am I missing something here. This doesn’t seem to solve my problem with Navigator. Are there packages that need to be downloaded before Navigator will run OK?

Were you able to update Navigator, after you updated the anaconda metapackage to custom? What version of Navigator do you have now? The traceback in your anaconda prompt does provide some clue as to what may be going wrong - but I don’t happen to know the solution offhand.

I could not launch spyder on the root environment and have trouble using 4.1.4 edition. I have been
current version: 4.12.0 of conda.

UnsatisfiableError: The following specifications were found

to be incompatible with the existing python installation in your environment:

If python is on the left-most side of the chain, that’s the version you’ve asked for.

When python appears to the right, that indicates that the thing on the left is somehow

not available for the python version you are constrained to. Note that conda will not 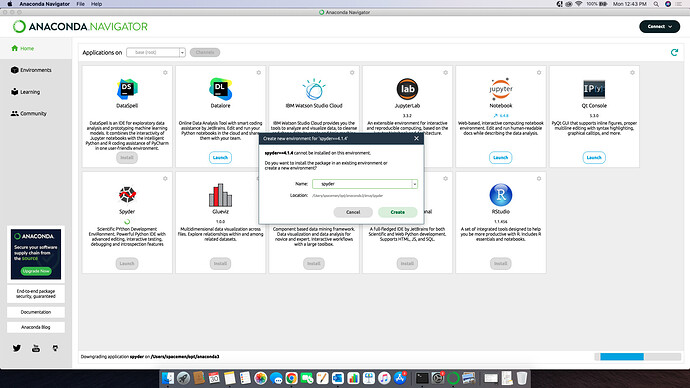 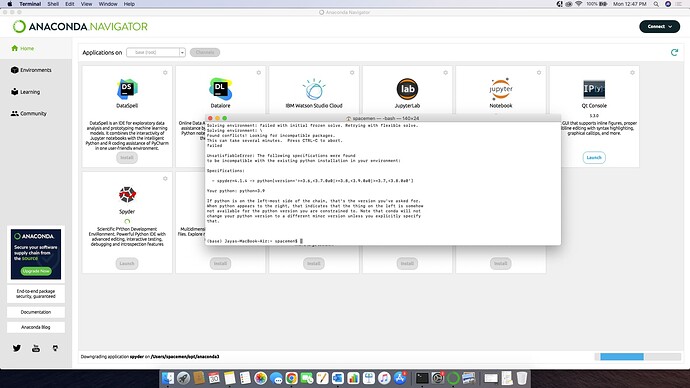 What is the error you are seeing with your installation of Spyder?
Can you try launching it from a terminal to see if you see an error or if it works from there?
I don’t believe Python 3.9 was released yet, when Spyder v4.1.4 was built - so there won’t be a version of it for Python 3.9. Looks like the oldest version of Spyder available for Python 3.9 is v4.2.0. However, I would expect a more recent version should work for you. The latest release of Spyder available at the moment is v5.1.5.