Anaconda for M1 is kind (Intel) despite using M1 installer

EDIT: I fixed this by using the terminal installer! Seems GUI is bugged? Another difference is I installed in Users/myname/anaconda3/ rather than /opt/anaconda3/ 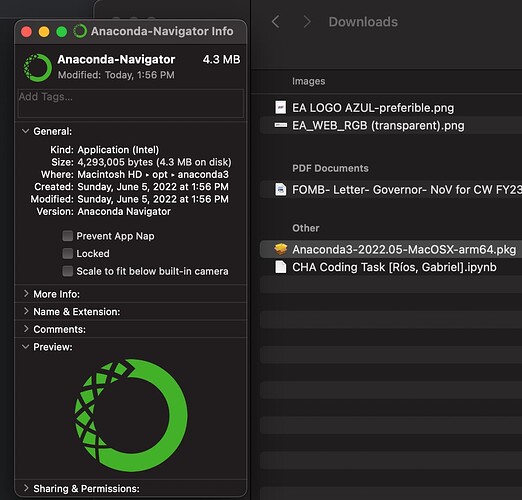 I’ve downloaded the M1 installer, yet Anaconda shows as Application (Intel) rather than Universal or Apple Silicon

This is the only thing I’ve found on this issue conda - New anaconda release for M1 (2022.05) - Data Science Stack Exchange (someone asking the same thing w/ no answers)

PS: Just in case it matters, some caveats. I didn’t actually get asked for Rosetta like the stackexchange post OP did, but I may have just installed it in the past. Another is that right before installing this version I first tried miniforge, failed to access the navigator, then uninstalled. I then proceeded to install Anaconda as I found out about the May 2022 update. However, the default link for Mac is the non-M1 installer and I noticed too late. The install worked, and so did the navigator and Jupyter Lab. However I wanted to ensure I had the most proper version - so again, I uninstalled Anaconda. I then finally proceeded to install Anaconda through the M1 installer, yet the issue persists (although at least now I have navigator).

I face the same issue even with a command-line installer. conda command works fine in terminal, but no anacaonda navigator can be found…

You can install anaconda navigator from command-line into your conda environment as follows: