Hello.
I am installing Anaconda3 for the first time on 2 Win10 with similar setups.

I am certainly running out of space,
and I actually reach 0 space left with Anaconda3.

I am posting because I am surprised to see the huge gap between Size and Size on Disk.
I wouldn’t have noted it if disk usage is 7 to 20 Gb, but it gets to almost 30!
NOTE1 that the installer says “Space required: 3.5GB”, and according to this, space available is more than enough.

Partition is D is formatted in exFAT to allow sharing personal data between Win10(bootcamp) and MacOS in dualboot. I ran disk checks and defragmentation before and after and is all OK. I had bad experiences sharing an NTFS partition.

One installation stopped due to out of disk space, while the other ended with bare space left. Both installations had same intensive disk usage, one is SDD and the other is HDD. The attached photo is showing the ended-one (the SDD).
NOTE2 that the installer stops and no error of “out of disk space” is shown, it just freezes there and has to be killed.

I tested installing it on NTFS (only one of both laptops have 30+ Gb on it with HDD), and the Gap is not as significative.
While my main faster laptop with SDD (my main one) doesn’t have enough of system disk formatted with NTFS.

Is there anything that I can do to get a reasonable disk usage on exFAT?
This is not happening with other applications stored on that partition. 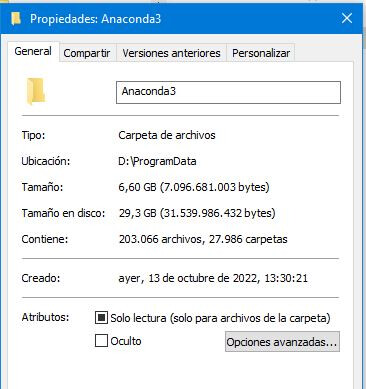