How to specify VPS Linux run python3.9 py-script in html?

Tried the pure guess: <py-script version="python3.9"> no luck. Anybody know how to specify py-script run a specific python version?

nice to meet you.

There is a mechanism called pyenv to specify and run a specific version of Python.
How about using it? 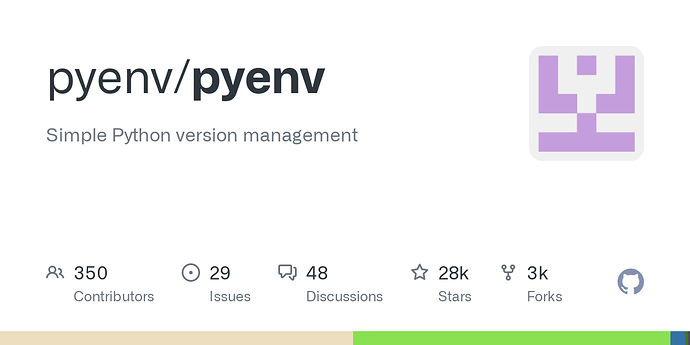 The version of the Python interpreter cannot be changed. You can specify the version of a (supported) Python module within the <py-env> tag.

Yes, john.hanley the question is how to specify using the /python3.9/ version because that is where the xrpl and wx modules are installed which the developers say need to run on python3.9.

I also stated I tried <py-enve version="python3.9"> with no such luck.

So how are you saying the python3.9 version can be specified within the <py-env> tag?

Next how do I add pyenv executable to PATH where is PATH?:

In order to use this command, you need to set the shell. Did you set it?

Three cases are provided: bash, zsh and Fish Shell.
And in the case of bash, the problem is known, so it is good to refer to the following URL.

pyenv init getting into an infinite loop when invoked from bashrc

The current installation instructions suggest to place the line eval "$(pyenv in…it -)" at the end of .bash_profile or .bashrc depending on the Linux flavor. This suggestion may lead to the following scenario: 1. The user puts it into .bashrc because that's where he is used to placing bash environment configuration. 2. The corresponding Linux flavor has bash configured to execute .bashrc on each bash invocation (not sure about Ubuntus, but this seems to be normal behaviour for many Linux flavors). 3. On login, the .bashrc is executed 4. The code in .bashrc reaches "pyenv init" 5. pyenv is an executable script which has #!/usr/bin/env bash specified as the interpreter 6. Consequently, bash is fired up to execute the script. 7. The new bash executes .bashrc 8. GOTO 4 Obviously, the immediate fix for the problem is to put the initialization line into .bash_profile rather than .bashrc, however at the point in time, when the user encounters this error, this is far from obvious (in particular, this has been the reason for me to not start using pyenv the first time I tried it and had no time to debug the problem, and now it took quite some time to figure out what's happening). It would be great to find some nice way to prevent this possibility for an infinite loop somehow. The options I'd see, in order of niceness: - Get rid of the need to run a script on initialization completely. Once I'm adding the $PYENV_ROOT/bin to the path manually on installation, I could as well add the $PYENV_ROOT/shims there in the same command line. - Have #!/usr/bin/env sh in the script header (this way bash won't load bashrc) and make sure nothing breaks. - If nothing else, at least fix the current documentation to mention the possibility of this caveat in red blinking letters somewhere.

And one more thing
If conda initialize exists in bash.rc or bash_profile, you must comment out that setting.

After commenting it out, pyenv should be able to use it.

For other troubleshooting, please refer to the following.

Yes ktsh.tanaka.2020 I added the bash commands and reset the shell.
No conda initialize exists in bash.rc or bash_profile,
Now even though I have python3.9 set as default by some other method:
$ python --version
Python 3.9.13

somehow the AlmaLinux 8 (cPanel)-WHM setup is not running on all cylinders.

This has VPS tech support stumped as well, so since pyenv is running and python3.19 is installed, it doesn’t look like a <py-script> problem. VPS support is looking into it hopefully getting back to me with an email. Will post anything good.

If VPS tech support can’t come up with anything then I’ll try pyenv uninstall python3.10 to see if <py-script> then finds python3.9.

ktsh.tanaka.2020 Haven’t heard anything yet from VPS tech support, but checking to see which python versions pyenv does recognize:
$ pyenv versions
* system (set by /home/worldblockchainc/.pyenv/version)

I find there is no .pyenv/version folder or file - but there is an empty .pyenv/versions folder!
Again it’s a AlmaLinux 8 (cPanel) VPS anything I can do here?

I find there is no .pyenv/version folder or file - but there is an empty .pyenv/versions folder!
Again it’s a AlmaLinux 8 (cPanel) VPS anything I can do here?

I understand the cause.
The root cause is due to the characteristics of the VPS. This can happen with SuseOS, even Windows or MacOS, whether the VPS is Ubuntu or CentOS.

Therefore, Python on the parent server side is recognized, but Python installed on the virtual server side as its instance may not be recognized.

To solve this problem, it is better to configure the py-script version for the parent server side.

The package pyenv will not change the version of Python running in the browser.

Pyodide, which PyScript is built upon, includes the Python interpreter built-in as a compiled Wasm module. You would need to modify and rebuild Pyodide to change the Python version.